The research of our group addresses changes in structure and functioning of marine ecosystems under anthropogenic pressure such as climate change and fisheries exploitation. The ultimate goal of our work is to contribute to a sustainable, ecosystem-based management that explicitely considers the needs, world views and potentials of resource users and stakeholders involved in fisheries systems. While based in the natural science, our approach is increasingly transdiciplinary, involving direct interaction and knowledge creation with non-scientific individuals and groups.

Saskia Otto: "One focus of my research is the development of suitable indicators for a sound ecosystem-based management of marine systems. Indicators are useful and versatile tools applied in disciplines such as engineering, chemistry, medicine, economy or sociology. In ecosystem-based management a key role of an indicator is to inform on the current status of the system component as well as the effectiveness of specific management measures to move the component into a different state. In European Union (EU) marine policy, indicator development has recently progressed as part of the implementation of the Marine Strategy Framework Directive (MSFD) to aid the achievement of Good Environmental Status (GES) of the EU's marine waters by 2020. GES is defined with respect to 11 qualitative descriptors (D1-D11) which describe the environment when GES has been achieved, such as the maintenance of biodiversity (D1) or the stability of the food web (D4). To achieve GES requires ideally operational indicators that not only describe the state of the descriptor but also have defined target and threshold values for triggering management measures as well as clearly defined and well-understood relationships to pressures that can be managed such as fishing mortality. The latter is particularly important for quantifying and predicting the success of individual measures. But at the same time, establishing such relationships is challenging for highly stochastic and complex adaptive systems such as food webs. Consequently, greater focus has been given hitherto to criteria such as data availability, scientific basis, or measurability than pressure sensitivity or indicator robustness. Together with collaborators and PhD- and Master students I co-supervise I develop quantitative frameworks and applications (e.g., the R package ‚INDperform‘)  for the validation of indicator candidates and their underlying data basis or sampling scheme. These tools allow additionally for the assessment of the current state in comparison to a reference state based on robust indicator suites. These tools are then used to test the suitability of currently suggested MSFD indicators, explore management scenarios, and apply a cross-comparison of GES in European Seas. Within the Bonus project BLUEWEBS I additionally study the potential of trait-based indicators for the pelagic systems in the Baltic Sea. Including traits, i.e. species properties, in indicator assessments has the advantage of focusing also on the functioning of the ecosystem and not purely on its structure." 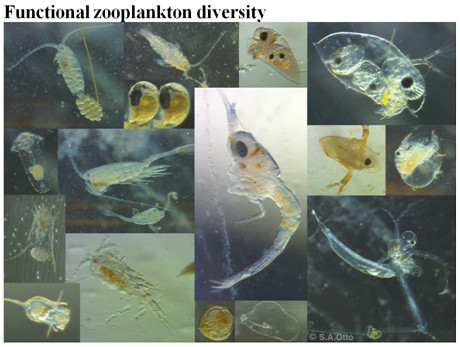 In marine, pelagic ecosystems, zooplankton plays a key role as it mediates the energy transfer between primary producers and secondary consumers, such as commercially important fish species. Strong contributions of zooplankton species to large-scale community shifts have been globally identified in the past years, also in the Baltic. Despite advances in identification and detection of trophic cascades and regime shifts in open and coastal ecosystems the coherence in timing between shifts in different basins and areas or the identification of key drivers underlying regime shifts and changes in key zooplankton species, several key questions remain unsolved, or are only partly addressed. These primarily concern understanding the potential changes in ecosystem functioning, particularly of key groups such as zooplankton. In order to provide answers to these challenges and sound scientific advice to management, a coordinated effort has been initiated through the project FUNBAZOO (FUNctional diversity of BAltic ZOOplankton). The aim is to build a zooplankton trait database and to identify the status quo of the diversity of functional traits in zooplankton communities in the Baltic Sea as well as potential long-term changes in the functional diversity and their key drivers"

A recent increase in the construction of Offshore Wind Farms (OWFs) has initiated numerous environmental impact assessments and monitoring programs. These have so far focussed on sea mammals, seabirds, benthos or demersal fish, but generally ignored any potential effects OWFs may have on the pelagic ecosystem. The only work on the latter had been through modelling analyses, which predicted localised impacts like enhanced vertical mixing leading to a decrease in seasonal stratification.
The working group of Prof. Christian Möllmann provided for the first-time an empirical bio-physical analysis of the pelagic effects of offshore wind farm foundations in the stratified North Sea. The data were obtained by towing a remotely operated vehicle (TRIAXUS ROTV) through two non-operating OWFs. The undulating TRIAXUS transects provided high-resolution CTD data accompanied by oxygen and chlorophyll-a measurements. The analysis provided empirical indication that vertical mixing is increased within the OWFs, leading to a doming of the thermocline and a subsequent transport of nutrients into the surface mixed layer. Nutrients were taken up rapidly because underwater light enabled net primary production in the entire water column, especially within submesoscale chlorophyll-a pillars that were observed at regular intervals within the OWF regions. Video Plankton Recorder (VPR) images revealed distinct meroplankton distribution patterns in a copepod-dominated plankton community.
Currently, the working group conducts scientific cruises to assess the wind wake effect, potentially inducing up- and down-welling dipols in the lee area of an OWF.

The sensor system is towed in undulation mode with 8 kn behind a research vessel and provides highly resolved bio-physcial data of the water column.