Phytophagous insects represent the largest radiation in terrestrial ecosystems. We focus on how speciation in herbivorous insects is linked to shifts in host plants and to adaptations to the numerous defensive plant compounds. To understand how insect herbivores can tolerate the toxic compounds of their host plants we combine molecular, physiological and chemical analyses. This experimental approach enables us to trace how detoxification systems and tolerance mechanisms evolve.

Our main focus lies on the genetic basis of adaptations, which we investigate by transcriptome analyses, single gene expression in cell culture followed by a functional characterization, and genetic knock-down experiments with phenotypic screening.

The ubiquitously expressed transmembrane enzyme Na,K-ATPase is essential for maintaining membrane potentials in animal cells. The Na,K-ATPase is inhibited by cardenolides (cardiac glycosides) that are produced by a variety of plant species as a defense mechanism against herbivores, having harmful or even lethal effects. Furthermore, the Na,K-ATPase controls various signal cascades in the cell, and - at least in vertebrates - endogenous cardiac glycosides function as signalling molecules. The highly conserved cardenolide-binding site has been well characterized, because of the medical significance of cardenolides which have been used for centuries to prevent heart failure.

Despite their toxic effect, there are numerous insects that are able to feed on cardenolide-producing plants without suffering any harm. The aim of our study is to understand the underlying mechanisms that lead to resistance against toxic plant compounds in insects. Here, we test the inhibitory effects of cardenolides on the Na,K-ATPase in vitro. Strikingly, we discovered a high amount of convergence in adaptation to cardenolides down to the level of specific amino acid substitutions.

In addition, directed transport processes play a major role: toxins are excreted, transported to storage compartments or kept away from sensitive tissues. We identify potential candidates for transporter genes bioinformatically, express them in vitro and characterize their function and substrate specificity. 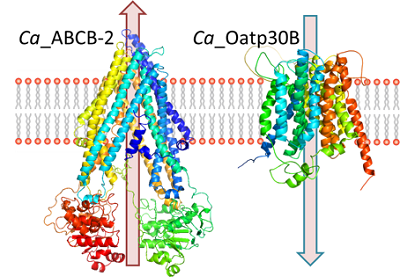 Flea beetles of the genus Longitarsus are a good example for a fast and very successful radiation of phytophagous insects. More than 70 species can be found on various herbaceous plants in Central Europe and over 500 species on a global scale.

Two classes of plant secondary compounds are repeatedly found in their host plants: pyrrolizidine alkaloids and iridoid glycosides. The beetles are able to tolerate these poisonous and insecticidal substances and even use them for their own defense. Here, we investigate the physiological mechanisms that enable detoxification and transport in the beetles, as well as the origin of these adaptations on the molecular level. 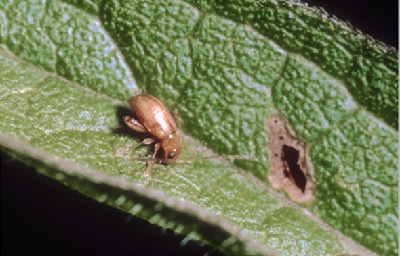 Reproduction-manipulating bacteria are known to cause biased sex-ratios in arthropods. Furthermore, they are suspected to play a role in speciation, by preventing successful reproduction of differently infected mating partners.

Flea  beetles of the genus Altica usually display a strongly female biased sex-ratio. In addition, most species bear a pervasive infection with one of three Wolbachia-strains. The situation is most intriguing in the common Central European species Altica lythri where three different mitochondrial haplotypes are each coupled with one of the three Wolbachia strains. Our genetic analyses show that this situation is most likely due to interspecific hybridization and introgression of two haplotypes into A. lythri. Since these haplotypes are in linkage disequilibrium with specific  infection types, the mitochondria and Wolbachia spread together in their beetle hosts.

As a consequence, this causes the observed sex-ratio bias in A. lythri: while two haplotypes/infection types have balanced sex-ratios, the third haplotype/ infection type only produces daughters. These females need to mate with males of other haplotypes to reproduce fertile offspring. The third haplotype can thus never exist alone. Currently, our genomic association studies focus on what causes the reproduction anomaly of the beetles. Since uninfected females of the third haplotype also produce only female offspring, the presence of Wolbachia cannot be the sole cause. Alternatively a conflict between the mitochondrial and the nuclear genome might be responsible that causes the death of the heterogametic sex as predicted by 'Haldane's Rule'.