Local adaptation plays an important role in shaping diversity in species with low gene flow. Local adaptation influences many biological levels, from phenotype to genotype, as well as gene expression profiles in animals and plants. Other factors such as reproduction strategies, population growth and dispersal modes also shape diversity.

Our group focuses on the Daphnia taxon, a keystone organism in freshwater ecosystems and integrates transcriptomic profiling with RNAseq, common garden experiments and genomics. Population genetic analyses allow us to identifying genes or genomics regions under selection. We then experimentally investigate the function of these genes, and the correlation between genotype and phenotype and individual fitness. Furthermore, we use comparative genomics tools to annotate genome regions without known function. Through the combination of these approaches, we can improve our understanding of intra and interspecific genetic diversity, and predict the impact of environmental change on freshwater ecosystems.

Transcriptomic and genomics in Daphnia galeata

Using RNAseq, the gene expression profiles of several Daphnia populations sampled along a latitudinal gradient and hatched from resting eggs were analyzed. In order to discriminate between the effect of genetic drift and selective forces, the divergence observed between the transcription profiles was compared to the population divergence at putatively neutral markers.

Of the initial ~33000 transcripts present in the reference transcriptome (Huylmans et al 2016), about a third was significantly differentially over expressed in one of the four populations compared to the others. Drawing on the considerable body of literature on gene expression variation in Daphnia as a response to various abiotic and biotic stressors, we build a stressor database (daphnia-stressordb) and are now annotating the differentially expressed transcripts.

Inferring expression profiles through an RNAseq analysis allowed to identify single nucleotide polymorphisms (SNP) and the calculation of genetic divergence between the populations. We could observe that sequence-derived data (SNPs) show a clear clustering of the clonal lines according to their population of origin, while a PCA on transcript counts doesn’t show a clear clustering pattern. This indicates a high plasticity of gene expression in D. galeata that might be caused by lower selective constraints on gene expression than on gene sequence.

Phenotypic variability among and within populations

The extensive data collection on our panel of clonal lines allows for an unprecedented approach in Daphnia. With a genome wide association study (GWAS), we can assess whether phenotypic values correlate with the genotypic setup. This can be analyzed under different stressors, and the readily available dataset for predator stress allows us to infer whether a given genotype confers a higher fitness regardless of the environment. On the contrary, there might be a trade-off: a given genotype might be associated with a high fitness in stress free environment but a lower fitness in a predator environment.

The aforementioned life history experiment on fish predation allowed the identification of clonal lines with very divergent strategies. To understand the genetic basis of such variation, we conducted an RNAseq experiment and identified differentially expressed transcripts and gene networks (fish response). While many genes were differentially expressed between the 2 studied clonal lines, only a handful is expressed differently in Daphnia exposed to fish kairomones. Taking advantage of the available data on other Daphnia species, we can compare this “fish response” between species and identify common gene networks. Thanks to the extensive genomic resources, we can assess the degree of conservation in regulatory networks in different species confronted to a common enemy. 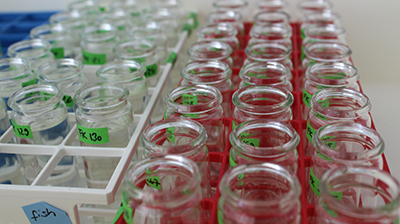 One well known and visible example of human mediated environmental change is eutrophication, due to phosphorus and nitrate concentration in freshwater ecosystems. Eutrophication affects the biodiversity at various levels, such as food web interactions, species composition or even genetic composition within species. Adaptive introgression has been described in a variety of species, such as the sunflower, poplar, mouse and salamander. However, in these species it is only possible to look at the present genetic variation. In species producing dormant propagules such as Daphnia on the other hand, one can observe genetic changes as they happen and thus follow evolution in action.

The focus of this research project is to analyze the hybridization timeline in the lakes of northern Germany, which represent a naturally occurring common-garden experiment. This framework of naturally occurring replication offers an ideal setting for a comparative study on introgression and its consequences in the Daphnia longispina species complex.

Our aim is to better understand why hybridization occurs repeatedly and why it is so widespread in the Daphnia group. More broadly this research will contribute significantly to our knowledge of hybridization in the animal kingdom. 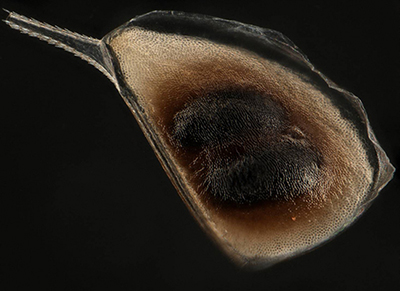 In Daphnia, like in crocodilians, Crepidula snails, and some fish species, sex determination is environmental. Males and females are genetically identical and sex chromosomes are absent. Thus, sex is a phenotypically plastic trait. Only a low percentage (18%) of genes shows sex-biased expression and there are many more female-biased than male-biased genes. Furthermore, female-biased genes tend to be more conserved between species than male-biased genes in both sequence and expression. These patterns may be a consequence of cyclic parthenogenesis leading to a relaxation of purifying selection on male-biased genes. The two analyzed clonal lines show considerable differences in both number and identity of sex-biased genes, suggesting that they may have reproductive strategies differing in their investment in sexual reproduction.

This project aims at identifying genome regions localized on the X chromosome in spiders of the Nephilidae family, based on bioinformatics analysis and subsequent validation in the molecular lab. The ultimate aim is to be able to use molecular markers to assess the sex of individuals and broods at any developmental stage (egg to adult) and measure the influence of Wolbachia infections on sex ratio in Nephila senegalensis. Developing sex specific markers is deemed difficult in spiders, since most have an X0 sex determination system and no chromosome found only in one sex. In most Nephilidae, females possess twice more X chromosomes than males. Theoretically, a gene localized on an X chromosome would therefore be twice as abundant in females as it is in males. Additionally, X chromosomal regions would be haploid (no heterozygous sites) in males and diploid in female. By using publicly available data, regions with higher female coverage have been identified Parasteatoda tepidariorum (common house spider), and quantitative PCR will allow to confirm whether these regions are indeed twice as abundant in females as in males. Using sequence comparison tools and molecular biology techniques, these regions (or part of them) will be sequenced in the focal species N. senegalensis, for which there is no genome available yet.